Both during the preparation and in the regular season , it’s necessary to increase or maintain the aerobic capacity. One way is interval training. The athletic works for a given time period and then is given a certain time for recovery. The time given to the athlete to work depends on what we want them to achieve that day. In the following video you will see an example of interval trainings in basketball. These exercises can vary with or without the ball as well as running exercises. The task at hand is to work 6 exercises for a period of 3 minutes work, and 3 minutes rest, matching a one to one ratio. During each exercise, there may be several changes(change of direction, etc), this is done without any interruption to the drill. The athletes enjoy the exercise more if music is applied into the workout. One idea of adding music to the work out, is insert certain sounds. When an athlete hears the sounds it indicates them to change stations or exercises. By adding this addition to the work out, it helps with time and organization with the drills, so the coach doesn’t have to look at his watch or blow the whistle for change. By having the music as the source of time and change, the coach is able to help set up the next drill, without having to worry about interruptions during the drill.

We divide the players into 2 groups of 6 and perform exercises of 3 minutes. The first group does the exercise while the second group waits for their turn.
Exercise 1: Every minute each couple switches stations so that every station is used in the exercise.
Exercise 2: Every 30 seconds players move from one position to the next.
Exercise 3: The players are in groups of three along the line. Each one shoots, gets the rebound, and pass to their teammate who is coming across to shoot. After 90 seconds the players switch sides of the court.
Exercise 4: The players in a straight line, the run and close out at the 3 point line, sprint to half court, back peddle to the foul line, defense slide from one slide line to the other where they receive the ball and go for lay up at the other basket, and after the lay up they get their rebound bring the ball back and repeat the drill. After 90 seconds they change the direction of the first slide which changes the side of the lay up.
Exercise 5: One player underneath the goal passes to the player standing in the corner of half court. The passer goes to half court. After 90 seconds the direction changes.
Exercise 6:.The players slide from left to right depending on what direction the coach shows. After he shots and the players in groups of 5 or 3 run five fast breaks. After the 5 fast breaks they repeat the same exercise for 3 minutes. 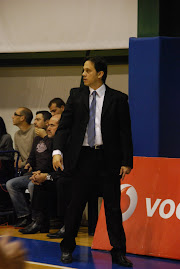